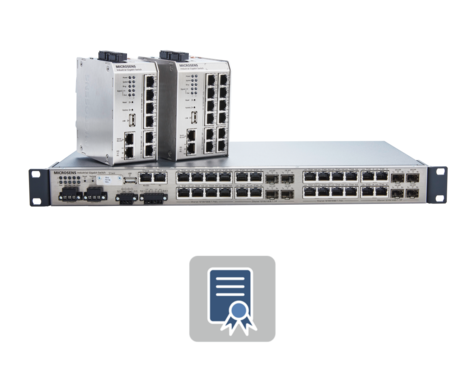 The proven Profi Line G6 product series: the DIN-Rail Switches Profi Line + and Profi Line Modular, the rack variant Profi Line Rack and the MICROSENS Industrial Switches are now available with special certification for railways and power distribution systems. The robust switches, which are available in versions with up to 25 Gigabit ports (of which up to 8x Dual Speed FO ports) and with up to 16 PoE/PoE+ ports, are now approved for extreme harsh conditions.

The switches are approved according to the following specifications:

Extreme conditions prevail in railway operations. The versions of the Profi Line G6 series from MICROSENS with railway approval are particularly resistant to vibrations, shocks and climatic fluctuations. They operate safe and reliable even at extreme temperatures. At the same time, they are insensitive to fluctuations in the power supply and, thanks to their enormous electromagnetic immunity, are optimally protected against EMC influences.

These special attributes make them the first choice for power substations. The high immunity to electromagnetic fields and surges, even during adjacent lightning strikes, ensures that communication in power substations functions smoothly even under the most adverse conditions.

The fanless switches can be operated in the extended temperature range from -40 to +75 °C and with DC voltage between 24 and 57 VDC. Despite their compact size, they each have two alarm inputs and outputs in addition to the data ports, for example for monitoring the distribution cabinet or for sensor/actuator integration.

The Profi Line G6 series was designed for highest reliability and availability with shortest recovery times and is therefore ideally suited for operators of "critical infrastructures". Both the SFP ports and the copper ports can be used to build ring structures for increased resilience. In the event of a fault, a special mechanism detects the failure of a network node or the interruption of a transmission path and automatically reconfigures the network within a few milliseconds.

Switch operating system, firmware and configuration data are stored on an SD card. This ensures that all settings are automatically adopted when a device is replaced by simply inserting the SD card into the new device.