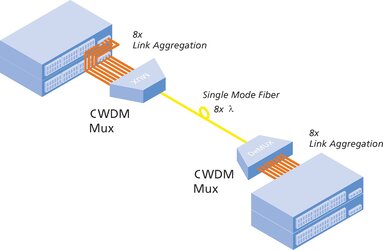 Standalone passive multiplexers are often used within xWDM systems to avoid the use of passive components in active module slots in chassis.

The CWDM channels are standardized according to ITU-T G.694.2.This means MICROSENS multiplexers are compatible with other CWDM systems and standardized CWDM transceivers.

Both versions are 19", do not require a power supply (MICROSENS definition for "passive device") and are completely protocol transparent. The CWDM multiplexers also have no limits with regard to the data rate to be transmitted; the limits are determined by the active technology and the fiber quality of the transmission path.

When using the 18-channel CWDM multiplexer, it must be ensured that the frequencies of 1270nm - 1450nm have an increased attenuation budget. This is due to the physical conditions. This should be taken into account in CWDM planning.