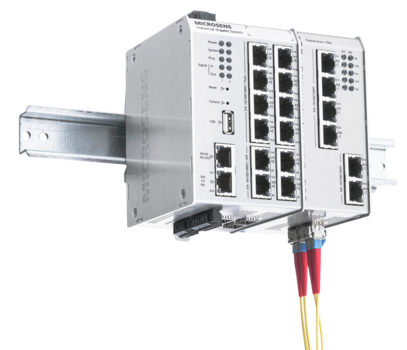 The new 10-Gigabit Uplink-Module, which extends the proven industrial switch series Profi Line Modular of the euromicron subsidiary MICROSENS, also offers top-level performance on the backbone sector. With its high-performance switching chip set and the two 10-Gigabit uplink ports, the new module is ideally suited for industrial applications and applications in security technology. Here, particularly the increased use of high-resolution video surveillance systems is causing rapidly growing data volumes. The 10-Gigabit Ethernet uplinks ensure that the continuously increasing data volumes on the end device side are transferred with the corresponding performance over the network.

The uplink module is connected over the extension port to the basic switch unit. It is equipped with two 10GBASE-X uplink ports, which are designed as slots for SFP+ transceivers. In addition, six 10/100/1000BASE-T Gigabit accesses are available for the connection of end devices.

The proven, robust Profi Line Modular series by MICROSENS stands for highest reliability even in harsh environments. The uplink ports serve to set up a ring-shaped topology to attain a higher network availability. The switch firmware and the configuration settings are stored on an access-protected SD card. If the hardware has to be exchanged, the card is simply inserted into the new switch which will then take over all settings by itself.

Top-level performance and reliability on very confined spaces, combined with flexibility and economic efficiency of a modular setup – the Profi Line Modular series by MICROSENS is the switch line for professional applications.

Transmitting information via fiber optic connections offers numerous benefits. MICROSENS GmbH & Co. KG recognised this very early on. As one of the pioneers, the company has developed and produced high-performance communications and transmission systems in Germany since 1993. Individually matched to the demands of diverse usage areas and embedded in comprehensive concepts for individual sectors. But, above all, close to the customer. Technical challenges from customer projects are incorporated directly into product development. This way, IP-based automation solutions are created for modern buildings, cost-efficient network concepts for the office and workspace, robust and fail-safe solutions for industrial environments, optical transport systems future-oriented wide area networks and efficient coupling of sites and computer centres.