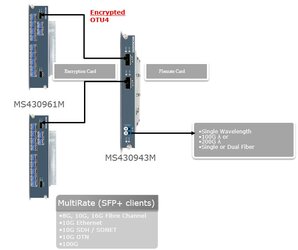 The MICROSENS MSP3000 encryption system reliably secures the communication connections on Layer 1 without loss of quality. The field of application covers the simple and efficient encryption of point-to-point connections with the aim of completely securing the complex networks running on the basis of Layer 1. The systems are particularly suitable for the realization of scenarios in which the topic of latency avoidance is assigned an extraordinary role.

The WDM encryption concept of MICROSENS is based on the encryption of an aggregated (Muxponder!) or optionally pure 100G signal (Transponder). Both options are offered on the service module. Aggregated, the following protocols can be transmitted encrypted according to AES-256:

Protocols with lower bandwidths than specified can be pre-aggregated into a 10G signal (using the 10G Muxponder service module) and then also transmitted encrypted.

A total of 10x10 "Multiprotocol" interfaces are available for aggregated encryption.

This means that all major protocols from Gigabit Ethernet via STM16 to 100G can be encrypted with just one service module.

The type of encryption used is the best standard encryption available on the market according to the "Adcanced Encryption Scheme" CGM AES 256. Key management is carried out according to the extended ECDH method according to Diffie-Hellman (Elliptic Curve Diffie Hellman) and thus provides a maximum possible key exchange every second, which results in a significant increase in security.

MICROSENS pays special attention to assuring a very simple handling when setting up the encryption with regard to the key parameters. The encryption process is started very easily by a user "Crypto-Officer" who has to identify himself in both systems via an authentication password. The rest of the process is then largely automated.

The result of our Layer 1 encryption process is an encrypted 100G signal according to the OTU4 protocol. The application possibilities of our point-to-point encryption include not only dark fiber applications, but also transmissions in an OTN network.

The 100G transmission then ensures the powerful Flexcard as a 100G service module.